“A husband who loses his wife is known as a widower, but there is no word to describe a parent who loses a child”. It is a brave task for one to explore the trappings of parental love. It is a braver task still to interpret a bestselling page-turner on the trappings of parental love and refrain from falling prey to the wasted labours of an underwhelming screen adaptation. The challenge is embraced by Derek Cianfrance whom, tellingly, appears drawn to explorations of darkness and pain (Blue Valentine; The Place Beyond the Pines). In The Light Between Oceans, Cianfrance’s dramatisation of Australian author M. L. Stedman’s first novel, the interplay of darkness and light gives a humbling lesson in lachrymosity, as even the stoics amongst us may end up needing to reach for the hidden hanky.

The year is post-war era of 1918, and Tom Sherbourne (Michael Fassbender), a decorated WWI veteran and a deeply scarred man, seeks refuge as a lighthouse keeper on the remote Janus Island off the coast of Western Australia (the film was actually shot at Cape Campbell Lighthouse in New Zealand, to the chagrin of many Australian fans). Having secured the post – as not many have fallen over themselves for the prestige of probable lonesome death – his hopes for a secluded existence would have been answered had it not been for a case of serendipity.

Isabel Graysmark (Alicia Vikander) is the ravishing daughter of Sherbourne’s new employer. Finding herself inexorably attracted to the quiet man with the stubborn moustache, she invites herself onto a seaside picnic for two, and thereby inviting herself into his life. When she learns that no female companion is permitted to set foot on the island with exception of the lighthouse keeper’s wife, she propositions him, with matrimony and life-long companionship.

For a man who has admittedly “never been good with words”, Sherbourne certainly knows his way to a lady’s heart with his honest, searing prose. If truth be told, he had me at “Dear Isabel”. Their courtship is short but heart-warming, comprising essentially their initial picnic and three epistles that had me wondering whether the film had peaked too early.

Their blossoming marital bliss offers glimpses of light, however ultimately acts as a decoy for the darkness that befalls them. After a childless marriage bearing two tumultuous miscarriages, Isabel is soon consumed by crippling guilt and despair. The set-up is complete then, when a baby girl washes up ashore on a dinghy with a dead man whom is presumably her father, Isabel keenly adopts the infant as her own. As a decent, honourable man, Sherbourne’s chivalrous acquiescence to his wife’s plan proves his labour of love, and one which will have far-reaching consequences for the tight-knit island community. 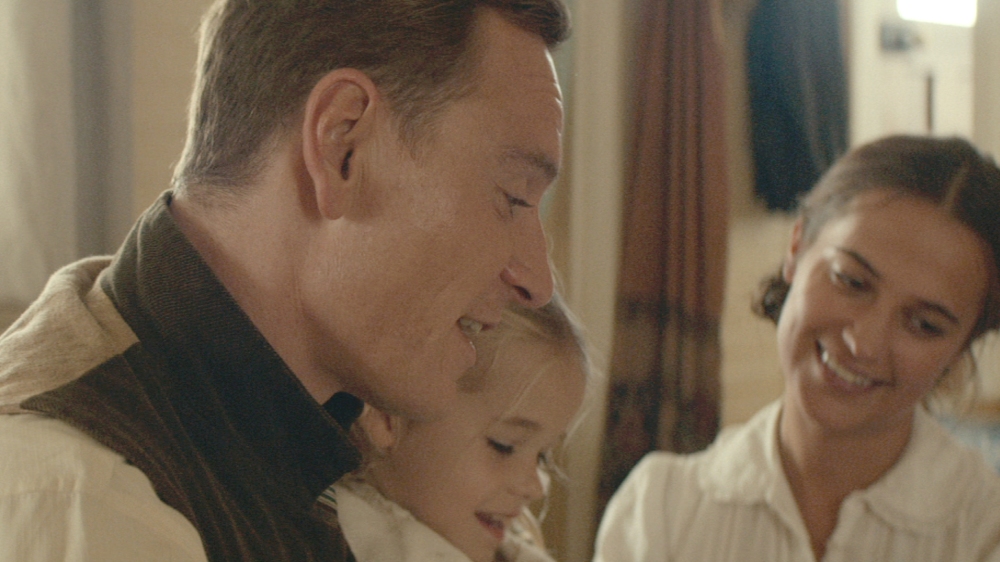 If I’ve complained previously of romance drama lacking the gripping tales of love (i.e. Me Before You), The Light Between Oceans delivers it in spades. In fact, the film is all about love, and manifestations of the various forms of love; that between a husband and his wife, and a mother and her child (whether or not biological). In the end, it is the final letter from a destitute husband to wife which provides the epiphany that love is all that is worth fighting for.

What makes art-house films such as this such an enthralling cinematic experience is the finely tuned synchronicity and onscreen presence of its leading cast. Vikander, as the veritable Scandinavian screen goddess, is perfectly matched against the stolidly imposing Fassbender, so much so that the film has spawned an enduring real-life romance between the pair. Vikander is also no stranger to having children wrenched from her, in light of her highly lauded renditions of both Queen Caroline (in the Danish period drama A Royal Affair) and Gerda Wegener (whose childless marriage to transgender Danish artist Lili Elbe is captured in The Danish Girl). 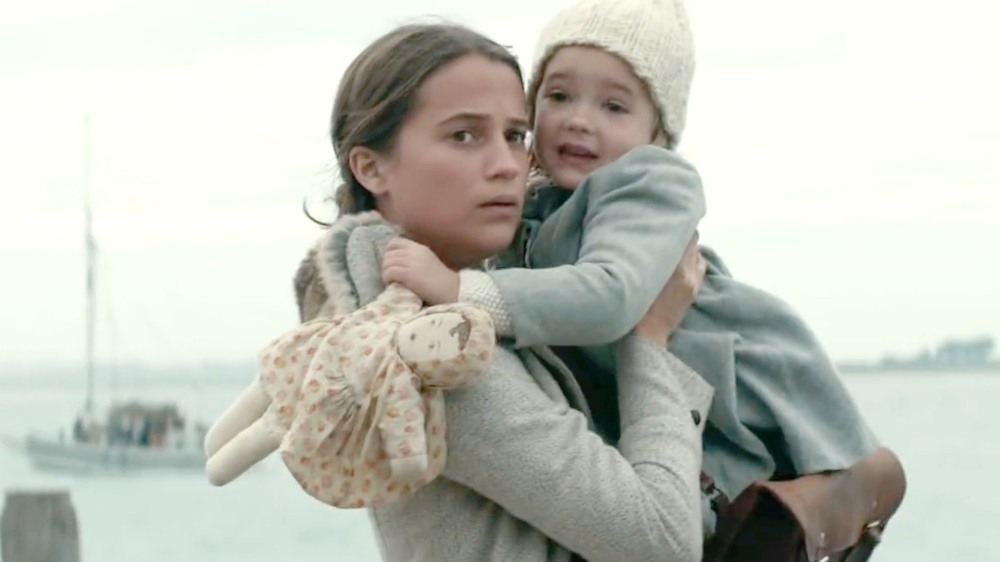 Despite a promising title, The Light Between Oceans is a study in consequences. Every action begets a reaction. Every decision has its consequences, some unintended, but which have the capacity to pave the path to perdition for all involved. Regardless of your moral persuasions, the film is not one which will leave you sitting on the sidelines. Such an excruciating depth of feeling is conveyed and vested; the only fault would be that there is too much of it. The melodrama engendered by extensive close-up shots of Isabel, combined with soft lighting throughout, left me reeling in a state of troubled, emotional incontinence. The possibility of reprieve is a futile ask, as our hearts are pulled in directions which left me yearning for an auto-dry function after tumbling with such a full load.

Despite its relentless intensity, The Light Between Oceans has broken my film review drought of the past 5 months, and of this I shall be grateful. All things considered, I think I rather liked my choices. What about you?

Tom Sherbourne: Dearest Isabel, Each day and each night when I look out across the ocean, I try to see you standing on the pier. I’ve been thinking about our time together, and what you said. You were right; I’ve been around so much death for so long that it has made me numb. And I suppose that is why I came to Janus. ‘Cause out here I’m only responsible for the light. For many years everything I touched would fade away and you are so full of life! That scares me. I admire your spirit too much for it to be clouded by my darkness. Yet, I can’t stop thinking about you. And the times spent with you allowed me to feel again! And for that, I thank you. And I am forever grateful.

Isabel Graysmark: Dearest Tom, I’ve received your beautiful letter. Thank you. Thank you for opening up to me. I know how hard that must be for you. I also know how hard it is to have lost. But we will have to get on with life; and you still have a light inside of you. I’ve seen it, and it shines just as bright as the stars in your sky.

Tom Sherbourne: Isabel, I’m not too good with words. Never have been. I guess I never knew it was alright to talk about the things I felt, so, here it goes. I’d love to show you my island, and my life, and if you do decide to come, I promise I will take care of you for always and I will do my very best to be a good husband. I hope you will like Janus as much as I do.

Isabel Graysmark: Tom, When I first saw you I felt like I knew you, and I couldn’t stop seeing my life with you. Building a family together. One that isn’t stuck in the pain of the past. And so, if you are asking me if my proposition still stands, then my answer is “Yes”. Yes! A thousand times “Yes”.

Bill Graysmark: Tom, it is clear to anyone who meets you that you are talkative. But you are also a very good man. Now that’s a relief, because you have the most precious thing in our lives. Take good care of her. Protect our little girl, she’s all we have.

Tom Sherbourne: I wasn’t expecting this. Life on Janus today… you can never tell what the tide is going to bring in from one day to the next. Anything that the two oceans fling at us. Anything that you can think of. Many of your brothers, your sons, your fathers didn’t come back from the war. I don’t know why God picked me to survive it. I don’t know what right I have to be given life whilst it has been taken from others. And what I really need to tell you is, I just try to keep the light burning for whoever might need it.

Tom Sherbourne: Isabel, love. I couldn’t go on the way things were. I couldn’t live with myself. I’m sorrier than I’ll ever be able to say for hurting you. We each get a little turn at life, and if this ends up being now my turn then it would still have been worth it. My time should have been up years ago. To have met you when I thought life was over, and been loved by you. If I lived another hundred years I couldn’t have asked for better than that. I’ve loved you as best as know and I always will, which isn’t saying much. You deserve someone a lot better than me. All I can do is ask God, and ask you, to forgive me for the harm I’ve caused. And to thank you for every day we spent together. I will always be your loving husband.

Isabel Graysmark: My darling Lucy, it has been such a long time. I promised I’d stay away from you and I have stuck to my word, however hard that was for me. I’m gone now, which is why you have this letter. And it brings me joy, because it means that you came to find us. I never gave up hope that you would. Knowing you were safe, and loved, allowed us to live our lives away from you. I hope life has been kind to you. I hope that you can forgive me for keeping you. And for letting you go. Know that you have always been beloved.

Frank Roennfeldt: You only have to forgive once. To resent, you have to do it all day, every day.