Long before its theatrical release in Australia, I have waited with bated breath for a film adaptation of one of the most popular modern romances – Jojo Moyes’ bestseller fiction Me Before You. Needless to say, the subsequent release of a tastefully edited trailer was enough to whet my appetite for a night of The Intouchables / The Fault in Our Stars meet Bridget Jones Diary. With a tear-jerking premise, a bestselling source novel and a pair of actors on a steady trajectory to veritable screen magnets, hopes were riding high on Thea Sharrock’s adaptation of Me Before You.

Unfortunately, for me, the film fell short of its potent tagline – “Live Boldly. Live Well. Just Live” – both in its failure to deliver the emotional whirlwind expected of such a fateful romance, or courageously confront the moral subtext of the protagonists’ ultimate decision.

The psychedelically cheerful Louisa Clark (Emilia Clarke, The Game of Thrones) is the soul of the film. A working-class provincial girl whom has never set foot beyond her sheltered environs, Lou (as she prefers to be called) is introduced as a daytime caregiver to daredevil-turned-quadriplegic, Will Traynor (Sam Claflin, The Hunger Games franchise). Not just any quadriplegic, Will is, at first glance, as caustic and ungrateful as Lou is sprightly and magnanimous. His status as the privileged local heir also doesn’t escape unnoticed, with the lush surrounds of his castle presented in sharp contrast to Lou’s humble British family abode. However, Time again proves to be a great healer and manoeuvrer of human emotions, as bilateral relations deepen the bond between the caregiver and her phlegmatic patient.

The film displays moments of brilliance in the first half. The transformation of Louisa Clark, a la Pretty Woman, attests to the aspirational Cinderella story for many (cue: retailers of little red dresses the world over would be having a field day). The intimate shaving scene also ranks high amongst cinema’s most electric moments, simmering with undeclared affections for someone so near and yet so out-of-reach (as Moyes would describe, “it was impossible to be this close to someone, to feel their skin tauten under your fingertips, to breathe in the air that they breathed out…without feeling a little unbalanced”). Musical fanfare comprising Ed Sheeran’s classic hits (Thinking Out Loud and Photograph) is also no less a saving grace.

The punch-line is soon delivered, however, as Lou learns that Will has advanced plans to end his life in an assisted facility in Switzerland. Dazed and distraught, Lou soon snaps out of her naïve ineptitude and launches in earnest a last-ditch effort to change his mind.

However admirable her designs, the underlying representation that Will’s privileged life is not worth living is a precarious topic that Sharrock never fully explores. The blossoming love story between Lou and Will – the bedrock of a neurotic film such as this – also fails to crescendo. Whilst Clarke and Claflin are effortlessly attractive actors in their own right (particularly Claflin who outshone a supporting cast as Finnick in The Hunger Games), the pairing did nothing for me. As Clarke’s eyebrows lit fireworks across our screens, Claflin’s performances seem to alternate between melancholy self-absorption and piteous adoration for the latecomer in his life.

Ultimately, Me Before You follows a long list of screen adaptations which don’t quite measure up to the original (other notable mentions include My Sister’s Keeper; Kite Runner; The Lovely Bones, to name but a few). As an unabashed movie cry-baby, my tear glands showed uncharacteristic strength when faced with engineered melodrama of this magnitude. 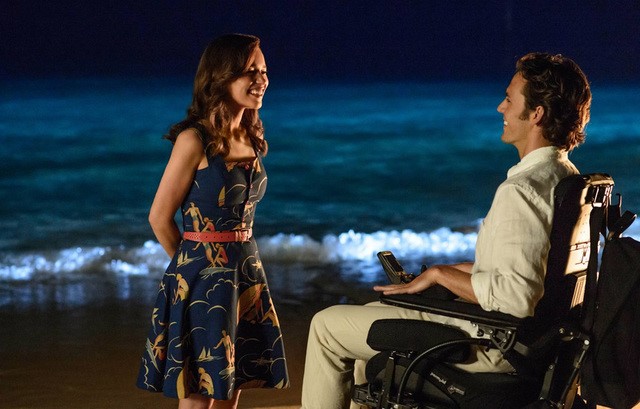 Will Traynor: My mother says you are chatty… Can we strike a deal whereby you are very un-chatty around me.

Will Traynor: This is the kind of place people come to when they got tired of actually living. People here think excitement is a new “Please Be Quiet” sign going up in the library. You should be out there claiming the world as your own… You need to widen your horizons, Clark. You only get one life. It’s actually your duty to live it as fully as possible.

Will Traynor: If I shut my eyes now I know exactly how it feels to be in that little square. I know every sensation. I don’t want those memories erased by the struggle to fit behind a table, the taxi drivers who refuse to take me, and my wheelchair power pack that won’t charge in a French socket.

Will Traynor: [To Louisa] Can I take you somewhere?

Will Traynor: I don’t want to go in yet. I just want to be a man who’s been to a concert with a girl in a red dress, just a few minutes more.

Will Traynor: I don’t want you to miss all the things that someone else could give you.

Louisa Clark: I have become a whole new person because of you.

Will Traynor: Move closer. [Louisa leans in closer] You know you never would have let those breasts so near me if I wasn’t in a wheelchair.

Louisa Clark: Oh yeah, well, you know you never would have even been looking at those breasts if you hadn’t been in a wheelchair.

Will Traynor: What! Of course I would.

Louisa Clark: No, you wouldn’t. you would have been too busy looking at the leggy blondes, the ones you can small an expense account at forty paces. Anyway, I would have been over there serving the drinks, one of the invisibles.